Few teams in baseball are playing as well as the Orioles lately. That’s not what anyone would have imagined entering the season or as recently as a couple weeks ago. As the calendar flipped to July, Baltimore was 35-43 and separated by six teams in the American League Wild Card standings. They were among the handful most clear-cut deadline sellers in the sport. Six Baltimore players were placed among MLBTR’s Top 50 trade candidates last Friday.

Fast forward just a few days, and the O’s have done everything in their power to make the front office think twice about selling. They’ve rattled off successive sweeps of the Rangers and Angels and carry an eight-game win streak. Pair that with a dreadful past week and a half for teams like the Blue Jays and Guardians — who were at or near the top of the Wild Card heap — and Baltimore has closed a stunning amount of ground. They head into play Monday two back of the final AL playoff spot, which is currently shared by the Mariners and Jays. They’ll have a chance to climb back to .500 tomorrow evening against the Cubs.

The Orioles aren’t going to continue winning indefinitely, of course. Their successive sweeps came against two below-average teams, and the Angels in particular have been in an absolute tailspin. Yet their solid play hasn’t been confined just to the past week and a half. They’re 22-14 since the start of June, outscoring opponents by 29 runs (170-141) over that stretch. That’s an arbitrary cutoff, and one can’t dismiss a 7-14 April that buried them in the standings right out of the gate. Yet this has at least been the best stretch of play for the franchise since their rebuild began in 2018, and they’ve gotten themselves into the playoff picture.

Will that be enough to deter the front office from moving some players off the roster for future talent? General manager Mike Elias struck a mild tone speaking with reporters last week (link via Roch Kubatko of MASNsports.com). “Everything that I do or that we do has tradeoffs, and all I can say is, we do everything from a very global, a very thoughtful perspective about what is the right thing to do for the health of the Orioles’ franchise,” Elias said. “I don’t know what’s going to happen, but I’m saying we’re taking a look at everything as we make these decisions and we’ll see what happens.”

The front office certainly doesn’t seem ready to declare the rebuild over and part with high-end talent to add pieces for the 2022 stretch run. Each of FanGraphs and Baseball Reference has the club’s odds of reaching the playoffs below 10%. Even as they’ve played their way back into the picture, it’s fair to wonder whether the roster — the starting rotation especially — can hold up for another two and a half months. Few would argue the Orioles are a better team than the Blue Jays, Mariners, Rays or Red Sox, yet they’ll have to outplay multiple members of that group (and hold off a handful of teams just them) to get to the playoffs . Even were they to add some rotation help and/or upgrade on any of Jorge Mateo, Ramón Urías or Rougned Odor around the infield, the O’s would remain postseason longshots.

If Elias and his staff aren’t likely to pivot and aggressively add before the deadline, there’s still room for them to stay the course without selling. By and large, the O’s current core can be kept around beyond this season. Baltimore has just three impending free agents on the roster. Odor and backup catcher Robinson Chirinos aren’t going to attract trade interest anyhow, meaning the only key rental for the O’s to decide upon is Trey Mancini. (His deal technically contains a $10MM mutual option for 2023, but he’s likely to decline and seek a multi-year free agent deal).

Mancini is having a good season, carrying a .281/.353/.420 line across 331 plate appearances. He’d attract a decent amount of interest as one of the better rental bats available were the Orioles to shop him over the next few weeks. Still, as an impending free agent with defensive limitations, he won’t bring back an eye-popping return. Baltimore almost certainly wouldn’t recoup a prospect generally regarded as a top 100 caliber player in a deal. In all likelihood, they’d land a couple of players most evaluators view as middle-tier prospects from another organization. 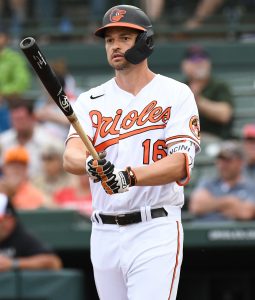 A Mancini trade would add talent to an already-deep farm system, but would there be enough appeal to pull the trigger if the Orioles remain within three or four games of a Wild Card spot by the August 2 deadline? In addition to his on-field value, the 30-year-old first baseman is generally regarded as a strong clubhouse presence. He’s a fan favorite, and his overcoming a 2020 battle with colon cancer makes him one of the sport’s easiest players to support. Dealing Mancini if ​​the Orioles were 10+ games back would’ve been unpopular with some segment of the fanbase; trading him if the team continues playing well and remains on the fringes of contention would be even more so. That’d be equally true in the clubhouse.

Baltimore’s highest-value assets are under a longer window of club control. Outfielders Cedric Mullins and Austin Hays can be kept around through 2025. They looked unlikely to change hands no matter how this season’s first half went, and that’s all the more true with the club showing signs of life. Closer Jorge Lopez Could be more likely to move given the inherent volatility with relief pitching, but he’s arbitration-eligible through 2024. That’s also true of corner outfielder Anthony Santanderwho’d have more modest interest than any of Mullins, Hays or López given his defensive shortcomings and up-and-down career track record at the dish.

Things should get harder for the O’s over the next few weeks. After a two-game set with Chicago, they’ll split their next ten games between the Rays (seven) and Yankees (three). Their final series of July will be in Cincinnati, followed by one pre-deadline matchup with Texas. Drop ten or 11 of those contests, and the O’s probably end up as sellers, at least parting with Mancini. If they can go 8-8 or 9-7 over that stretch, though, Elias and his staff will have to decide on a team hovering around .500 and likely within a distance of a playoff spot for the first time in six years shout.

The front office is certainly going to remain mindful of the long-term outlook. They’re not going to suddenly jump into the Luis Castillo or Frankie Montas bidding, although perhaps they could entertain the idea of ​​adding a lower-impact starter with a lengthier window of remaining control. Yet the team has played well enough of late to give themselves a shot to avoid subtractions. Much will depend on how they play over the next three weeks, but the Orioles may not be as motivated to deal as they’d seemed just a few days ago. That’s a credit to their surprisingly strong play over the past month-plus. The team has given themselves a shot to make the front office rethink their deadline outlook, and the next 15 games should be the franchise’s most important in a half-decade.