Rochelle Humes and Charlotte Hawkins were among the star-studded arrivals for the 2022 Television and Radio Industries Club Awards in London’s Grosvenor House on Wednesday.

The presenter, 33, flashed a hint of her toned abs in a cropped camel ensemble with ruched detailing as she graced the blue carpet ahead of the coveted TV event.

Meanwhile Charlotte put on a dazzling display in a sparkly white mini dress with a 1920s-inspired tasselled skirt as she made her way along the blue carpet at the awards. 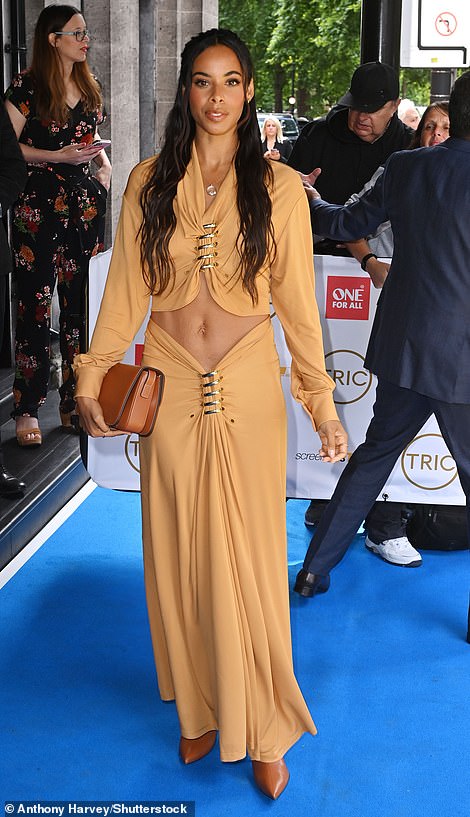 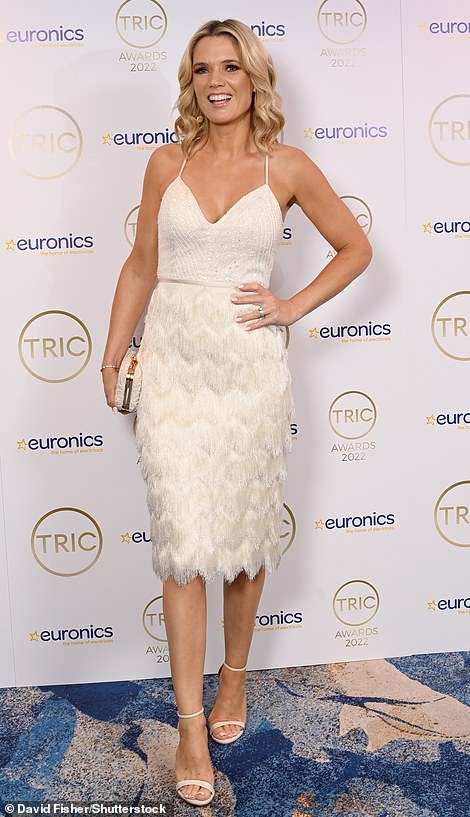 Here they come! Rochelle Humes (left) and Charlotte Hawkins (right) were among the star-studded arrivals for the 2022 Television and Radio Industries Club Awards in London’s Grosvenor House on Wednesday

Rochelle flashed a hint of her taut stomach in a fun camel-colored look which boasted a ruched front, a revealing cut-out and a gold fastening, flowing into a floor-length skirt.

The star teamed her look with tan leather boots and a matching clutch bag as she arrived with her dapper husband Marvin in tow.

Charlotte looked equally stunning in a fun white dress with a dramatic flapper-inspired skirt and matching strapped heels, beaming as she posed for snaps at the awards event. 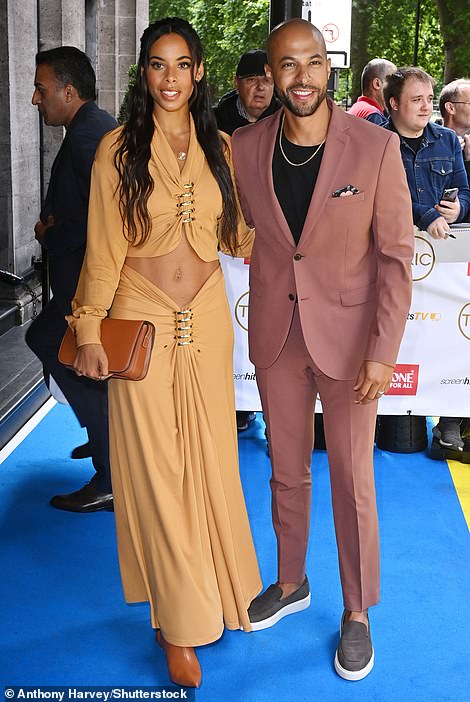 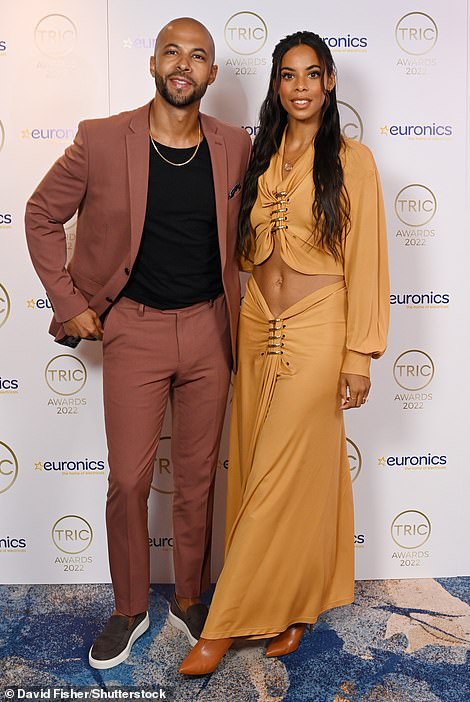 Couples outing! The presenter is joined by her husband Marvin, who cuts a dapper figure in a smart dusky pink suit 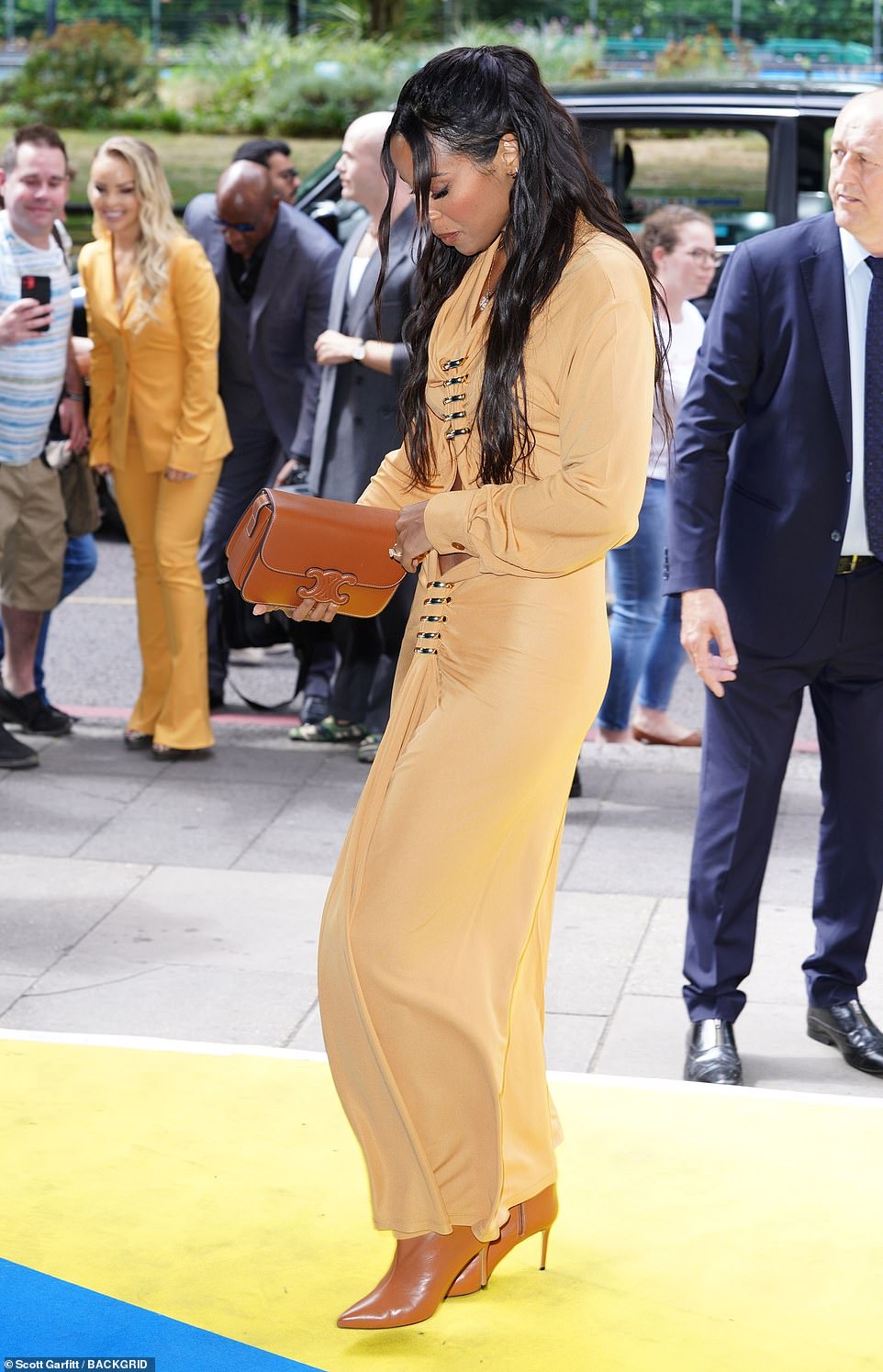 Amazing: The star teamed her look with tan leather boots and a matching clutch bag as she strutted onto the blue carpet for the annual awards event 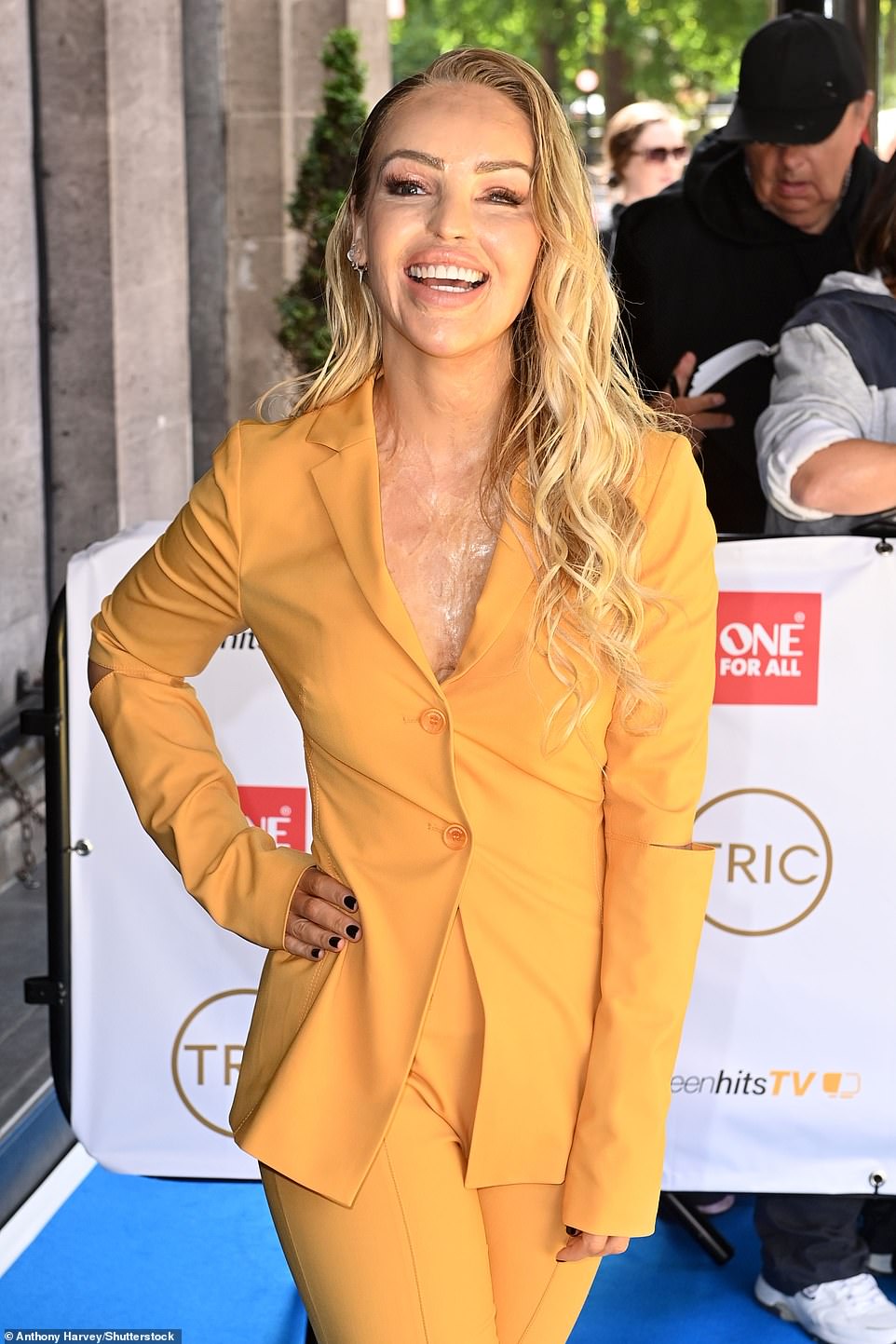 Suited and booted: Elsewhere Katie Piper opted for a chic mustard colored trouser suit with a plunging blazer as she arrived for the awards

Elsewhere Katie Piper opted for a chic mustard colored trouser suit with a plunging blazer as she arrived for the awards, while Ranvir Singh donned a simple striped midi dress and Laura Tobin opted for a fun floral frock.

Ant and Dec, Kate Garraway, drama It’s A Sin and Strictly Come Dancing led the nominees in the 17 categories – with the winners decided by the public and industry vote.

In the TV Personality category, Ant & Dec are up against Bradley Walsh, Rylan Clark and Piers Morgan.

The New Drama category sees award-winning It’s A Sin, up against Vigil, The Pembrokeshire Murders and Around the World in 80 Days, while the Drama award has Line of Duty, Call the Midwife, Vera and All Creatures Great and Small as contenders.

In Game Show, it’s a tight race between Michael McIntyre’s The Wheel, The Chase, Richard Osman’s House of Games and Would I Lie To You? Meanwhile in Entertainment there’s stiff competition between Ant & Dec’s Saturday Night Takeaway, Bradley Walsh & Son: Breaking Dad, The Graham Norton Show and Gogglebox

In the Soap category, it’s a battle of heavyweights with Coronation Street, Emmerdale, EastEnders and Holby City all fighting for the gong.

And for Reality shows, there’s a new kid on the block, well, new big kid, Clarkson’s Farm takes on The Masked Singer, Strictly Come Dancing and I’m A Celebrity Get Me Out Of Here!

There’s an award for Podcast of the Year, while radio nominees see Roman Kemp, battling it out with the Queens of radio Kate Garraway, Amanda Holden and Sara Cox

18 awards will be presented in total, including the TRIC Special Award.

The TRIC Awards recognize the very best TV, radio and online shows, as well as Britain’s most-loved stars and talent.

The TV star looked delighted to be back with his old colleagues at the event held in London, as the breakfast show led the winners at the star-studded awards.

It was also a day to remember for his former co-star Kate Garraway, who was recognized with a special award after continuing her tireless TV and radio work while her husband Derek Draper battles Covid-19.

GMB itself also scooped the prize for Multi-Channel News, while fellow ITV staples This Morning and I’m A Celebrity Get Me Out Of Here awarded gongs for Daytime and Reality respectively.

Roman’s co-star Siân Welby was seen clutching a TRIC trophy as their Capital Breakfast show secured an award in the Radio Program category.

The Soap Of The Year gong was given to Coronation Street, with the show’s actress Shelley King landing the Soap Actor prize.

BBC program Would I Lie To You? was announced as the winner of the Comedy category and The Repair Shop scooped the gong for best factual show.

The Crown was awarded the prize for the Drama category. Gordon Ramsay, Gino D’Acampo, and Fred Sireix were elated when their show American Road Trip! was recognized for the Food category award.

Soap of the Year

The Graham Norton Show (BBC One)

Podcast of The Year

Best TV Personality of the Year

All Creatures Great and Small (Channel 5)

Call the Midwife (BBC One)

Line of Duty (BBC One)

A League of Their Own (Sky One)

Match of the Day (BBC One)

Michael McIntyre’s The Wheel (BBC One)

I’m a Celebrity Get Me Out Of Here (ITV1)

A Place in the Sun (Channel 4)

The Great British Bake Off (Channel 4)

Paul O’Grady: For the Love of Dogs (ITV1)

The Repair Shop (BBC One)

Around the World in 80 Days (BBC One)