The White House’s chief Covid coordinator recommends young children who have already been infected with the virus to still get vaccinated – even as data shows they suffer limited risk of hospitalization and death and that natural immunity is effective at preventing the worst outcomes.

The shots’ rollout began on Tuesday, marking the youngest and final age group to be made eligible for the vaccines after the Food and Drug Administration (FDA) and Centers for Disease Control and Prevention (CDC) both did green-lighted the Pfizer-BioNTech and Modern shots for children six months to five years old last week.

Dr Ashish Jha, the White House’s COVID-19 response coordinator, told CBS Tuesday morning that he recommends parents get their children vaccinated, even if the child has natural immunity from a previous Covid infection – for which CDC data shows around 70 percent of US minors have.

Jha’s guidance comes even as official data continues to show the limited risk children face from the virus, and that there was limited demand for the shots when they became available to children between the ages of five and 11 earlier this year.

Covid cases are starting to drop once again in America, falling below the 100,000 mark for the first time since May on Tuesday – though delayed reporting from the Juneteenth holiday may be causing the shift. 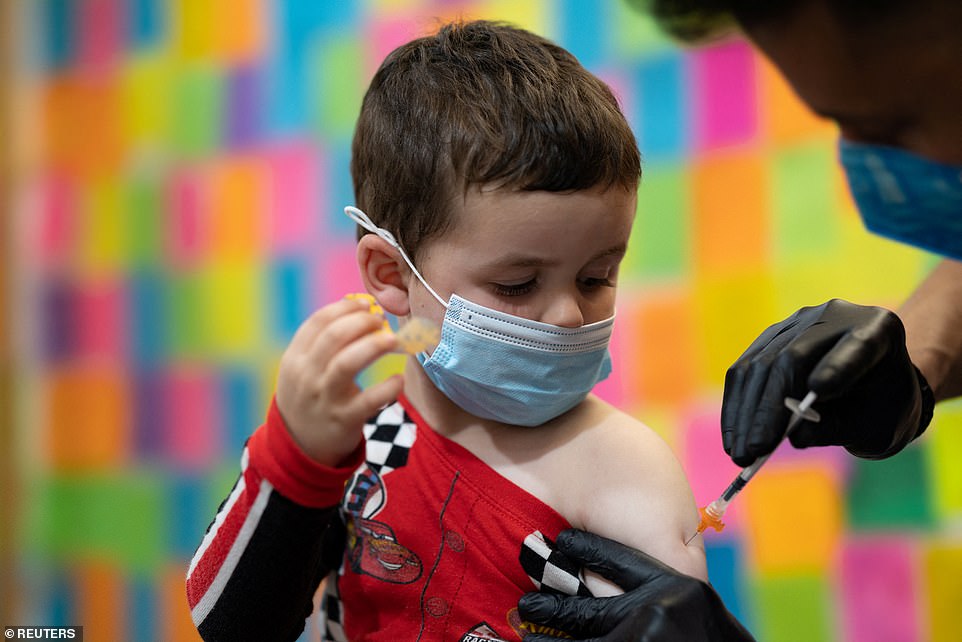 A 3-year-old receives the Modern vaccine. A nationwide role out began today to get children under five vaccinated, even though state-level reports show that 0.00 – 0.02 per cent of all child COVID-19 cases resulted in death 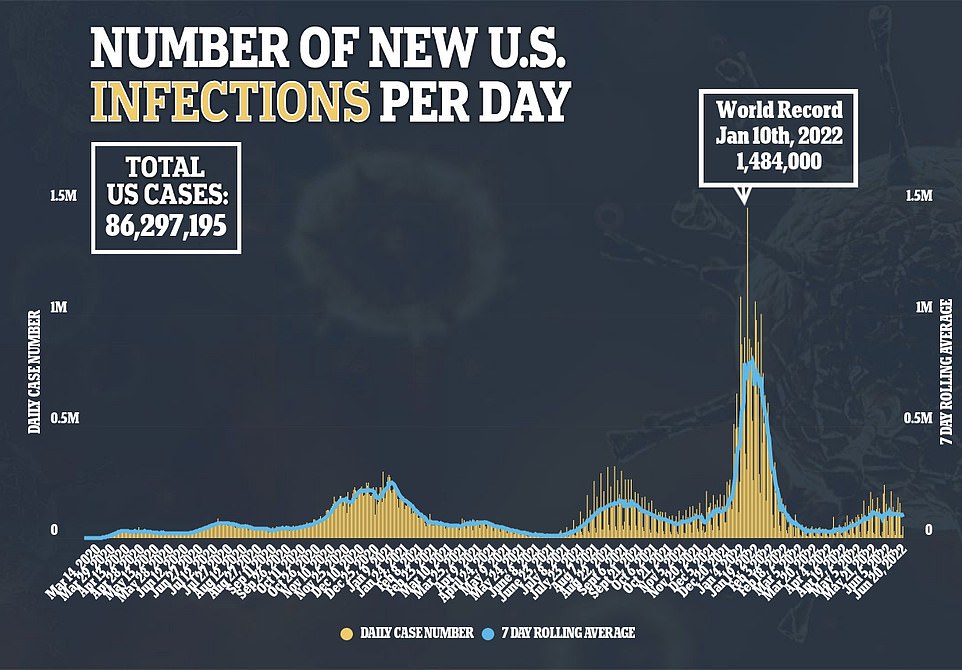 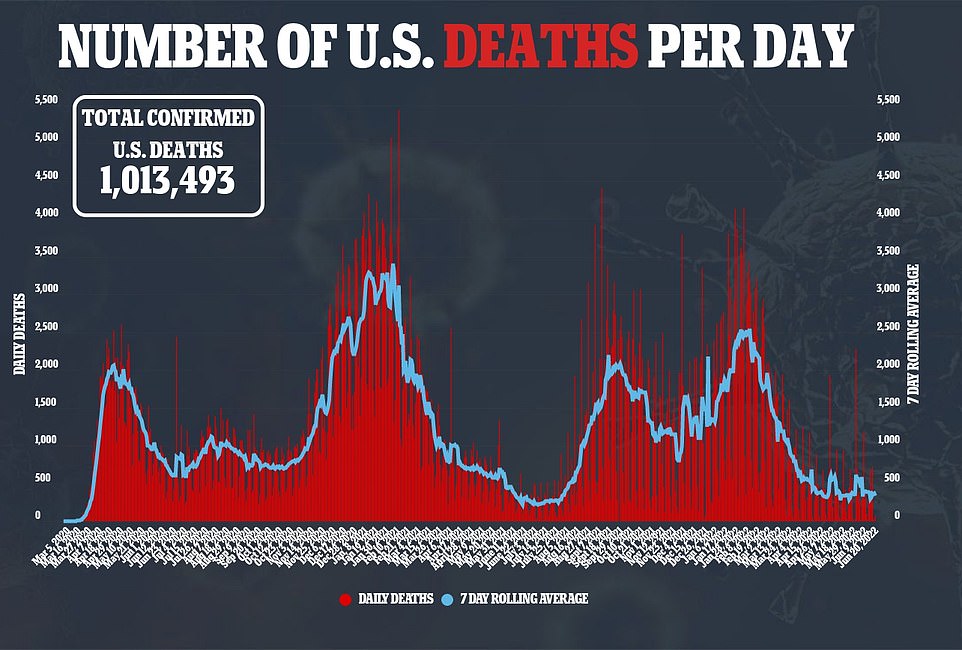 ‘Covid has been quite common in children we actually think almost 70 percent of kids have ended up getting infected with Covid,’ Jha told CBS mornings. 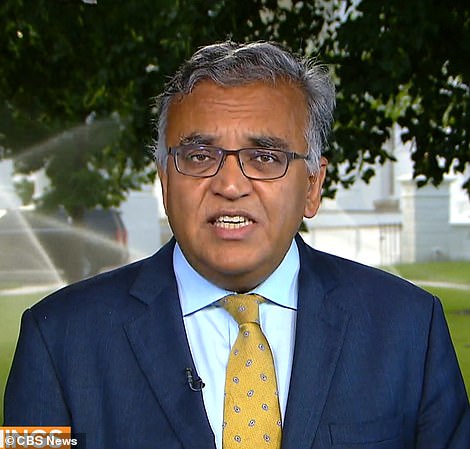 Dr Ashish Jha (pictured), the White House’s Covid response coordinator, said Tuesday that even children with natural immunity through previous infection should get vaccinated for Covid

‘Still worth getting the vaccine, it really offers an extra layer of protection and what vaccines do they keep kids out of the hospital and that’s why they are so effective.

‘And everybody deserves that level of protection. Even if your child has been previously infected the strong recommendation is to get your child protected. ‘

It comes as the shots first become available around the US Uptake for the shots may be limited, though, especially during the early stages of their rollout.

Polling for the Kaiser Family Foundation found that only about one in five parents of children under the age of five (18 percent) are eager to get their child vaccinated right away, while a larger share (38 percent) say they plan to wait a while to see how the vaccine is working for others.

There was also limited demand for the shots last time the FDA made them eligible for a younger age group, children aged five to 11.

According to official CDC data, only 30 percent of Americans in the age group are fully vaccinated, half of the 60 percent between ages 12 to 17. Minors in general have low vaccination rates, with the youngest adults having vaccine uptake of around 80 percent. 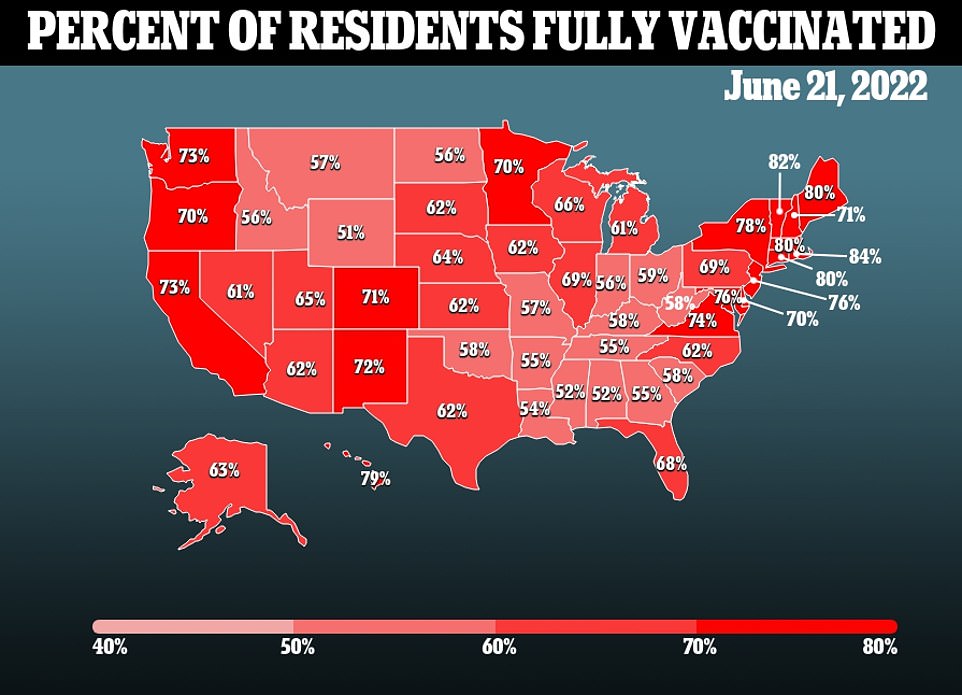 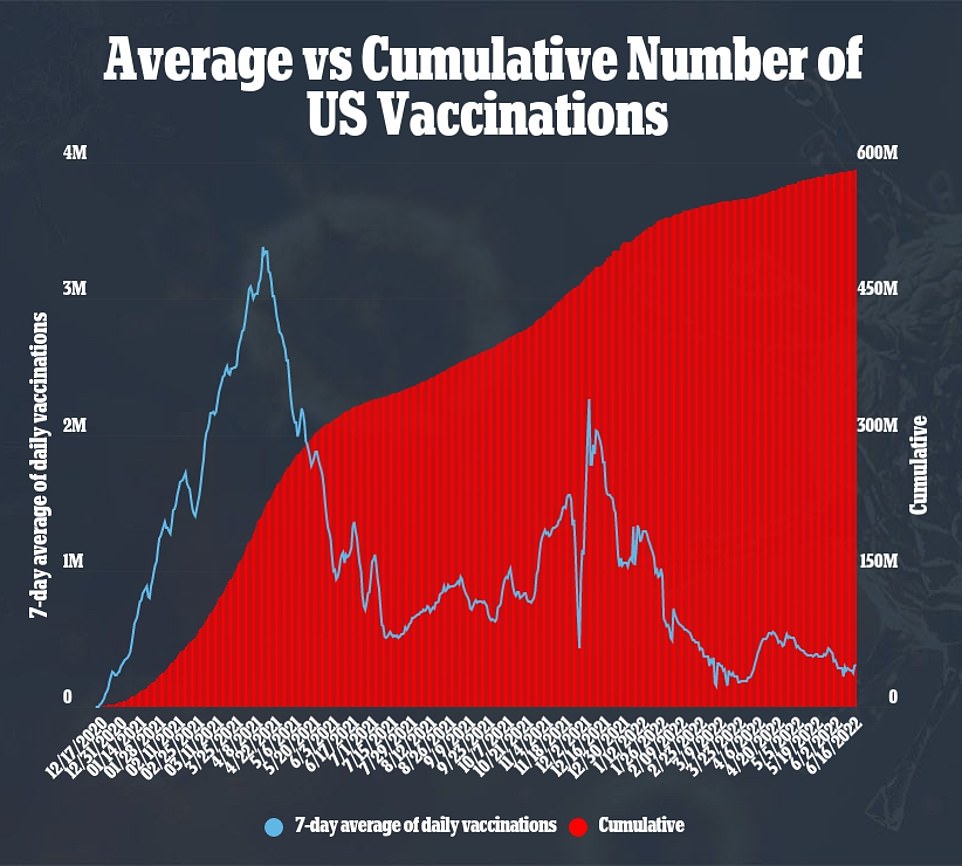 Former FDA Chief Scott Gottlieb, who now serves as a board member at Pfizer, said over the weekend that he predicts demand for the jabs to be low at first.

‘I think it’s going to be a little bit more of a slow rollout relative to what we’ve seen in past rollouts with other age groups,’ he told CBS ‘Face the Nation.

‘There are going to be pharmacies that are vaccinating children. CVS is going to move it into their pharmacies, but they’re only moving in to the pharmacies with advanced care providers with their MinuteClinics.

‘Maybe around children’s hospitals, you’ll see some clinics standing up, but most people are probably going to get vaccinated in their pediatricians’ offices, and it’s going to take a little bit more time to get the vaccine into those local settings because it’s more difficult to vaccinate a child who is very young. ‘

Jha agrees that it will be slow at first, but hopes that uptake will eventually grow as parents are informed by their doctor.

‘We expect confidence in these vaccines to build over time in these populations,’ he said.

‘What we have encouraged parents to do is talk to their family physician talk to their pediatrician, you know the people who take care of their kid and have that conversation. I think over time we are going to see a majority of parents ending up getting their children protected with these vaccines. ‘

There are still some concerns about the shots, though, and the small sample sizes used in their clinical trials. Especially as children make up around 0.1 percent of US Covid deaths despite a vast majority having been infected at this point.

Pfizer revealed preliminary data last month showing the vaccine was 80 percent effective at preventing infection from Omicron, although the efficacy rate may change as more trial participants need to be infected before the figures can be finalized.

The Pfizer jab will come in three doses, unlike the two dose standard set for older age groups. It will also be only three micrograms, a tenth of the size of the standard adult dose, and a third of dosage for children five through 12. 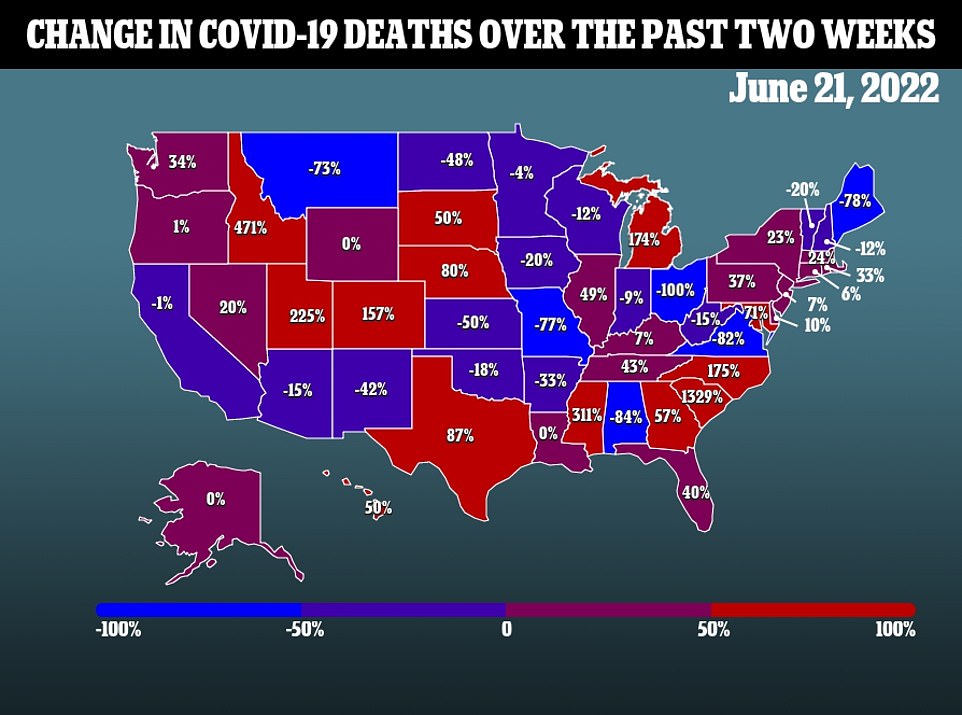 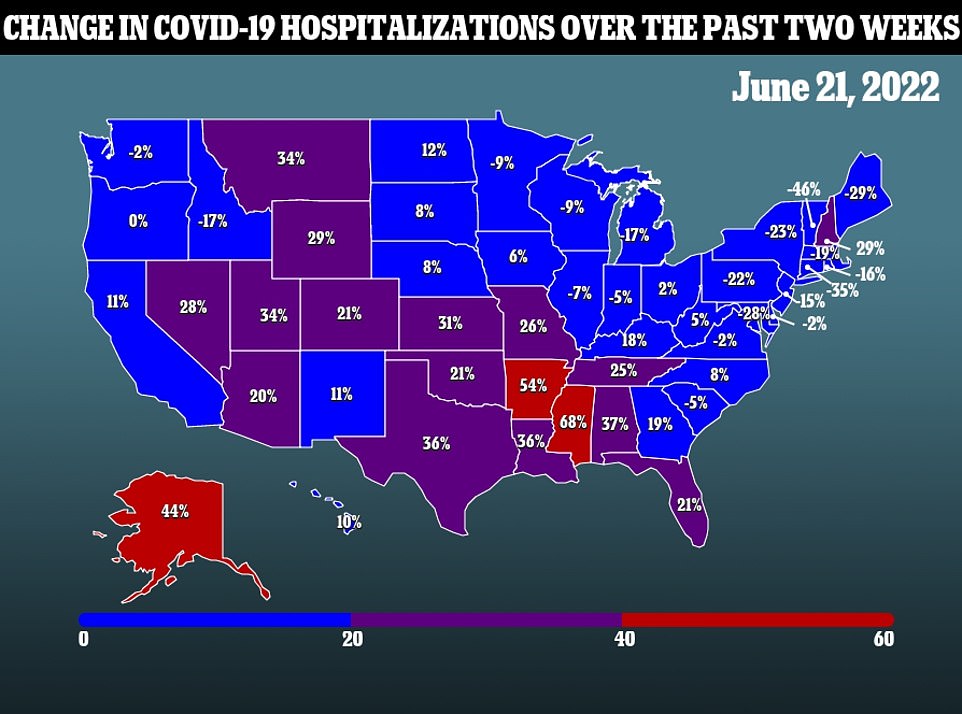 The switch was made towards the end of last year when early data showed that only two doses of the jab provided little protection against the virus.

‘We know many parents in the US have been eagerly awaiting an authorized vaccine for their children under 5 and we are proud to now offer them a vaccine option with a favorable safety profile,’ Albert Bourla, CEO of New York City-based Pfizer, said in a statement.

Modern will use a two-dose jab for young children, with each shot being 25 micrograms – a fourth the size of its adult sized shots.

In clinical trials, the Modern shot was 50 percent effective at preventing mild infection from the virus.

Pain, redness and swelling at the injection site, fever and swelling of the groin and underarm were the most common reported side-effects of the shots.

‘We are thrilled that the FDA has granted Emergency Use Authorization of Moderna’s COVID-19 vaccine for children and adolescents, particularly for our vulnerable, youngest children,’ Stephane Bancel, CEO of Moderna, said in a statement.

Both of the shot’s were deemed safe and effective by both the FDA and by a panel of outside advisors, known as the Vaccines and Related Biological Products Advisory Committee (VRBPAC).

‘In addition to making certain the data for these vaccines met FDA’s rigorous standards, the agency’s convening of an advisory committee was part of a transparent process to help the public have a clear understanding of the safety and effectiveness data supporting the authorization of these two vaccines for pediatric populations, ‘Dr Peter Marks, the FDA’s top regulator, said in a statement.

The most concerning, and most published, side-effects of the COVID-19 vaccines are the heart inflammation conditions myocarditis and pericarditis.

The FDA reports that the risk of these conditions is low in this age group, though, instead of striking 12 to 17 year olds the most with the Pfizer shot, and 18 to 24 year olds with the Modern Jab.