The Orioles have acquired their fair share of formerly well-regarded prospects over the course of a drawn-out rebuild, as one would expect of a team in their situation. For the most part, there’s little to show for their frequent waiver claims and minor trades in this arena, however. Names like Maikel Franco, Kelvin Gutierrez, Carson Fulmer, Chris Shaw, Dilson Herrera, Rio Ruiz and Jahmai Jones have had brief spells in recent years, none producing much in the way of value. Longtime top prospect Jorge Mateo is currently on the roster and leading the AL with 19 steals … but he’s also been one of MLB’s worst hitters, evidenced by a .199/.247/.335 batting line.

For much of his tenure with the Orioles, it looked as though right-hander Jorge Lopez was destined to join that list of once-promising names who got another shot in Baltimore but never really panned out. Lopez was a second-round pick of the Brewers back in 2011 and ranked as one of the system’s better arms for years. He was eventually traded to the Royals alongside Brett Phillips in the deal that brought Mike Mustakas to Milwaukee, and Lopez went on to have a rather nondescript run in Kansas City. Appearing in 47 games — 25 of them starts — he was rocked for a 6.42 ERA over the life of 158 1/3 innings. The Royals eventually felt he’d had enough opportunities and cut bait. The Orioles claimed Lopez off waivers.

Heading into the offseason, Lopez looked as though his time with the team could be up. Due for his first trip through the arbitration process, Lopez was a soon-to-be-29-year-old who’d posted an ERA north of 6.00 in three consecutive seasons. The O’s had acquired and discarded plenty of former top prospects of this nature, and few fans or pundits would’ve been surprised to see Lopez meet the same fate. Many — myself included — felt a Lopez non-tender was all but a given.

Instead, the Orioles signed Lopez to a one-year, $1.5MM deal on the day of the non-tender deadline. It might prove to be the best use of payroll resources so far during Mike Elias’ time as the team’s general manager, as Lopez appears all but assured of earning his first ever All-Star nod. 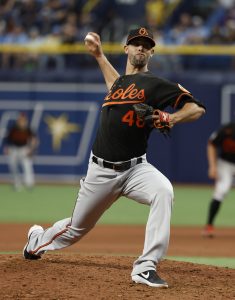 Through the first three months of the season, the 29-year-old Lopez has stepped up not only as Baltimore’s closer but as one of the best relievers in Major League Baseball. Pitching exclusively in relief for the first time in his big league career, Lopez has seen the average velocity on his sinker jump to a career-best 98.0 mph. Never one to miss many bats in prior seasons, he’s logged an 11.6% swinging-strike rate that, while not elite, is three percentage points higher than his pre-2022 career mark and is slightly north of the 11.1% MLB average. Unsurprisingly, he’s fanning opponents at a career-best 27.1% clip so far in 2022. Again, it’s not an elite level — Lopez is tied for 64th among 178 qualified relievers in overall strikeout rate — but it’s comfortably above the 23.4% average league for relievers.

Lopez does possess at least one elite skill, however. Opposing hitters can barely elevate the ball against him. The right-hander’s 64% ground-ball rate is the third-best in baseball among qualified relievers, and while no one’s catching Clay Holmes in that regard (82.4%), Lopez’s power sinker has helped to turn him into a bona fide bullpen force.

The success lies notz in the fact that Lope is getting hitters to pound the ball into the ground — it’s in the fact that the contact against him, both in the air and on the ground, is generally hapless. Hitters are averaging an 84.5 mph exit velocity against Lopez on grounders — well below the league average — but even when they manage to lift the ball, it’s been wildly ineffectual. Lopez has yet to surrender a home run this season, and his opponents’ average 89.7 mph exit velo on liners/fly-balls is tied for the 19th-lowest mark among 368 qualified big league pitchers.

Given the sinker’s dominance, it’s not a surprise to see Lopez going to it more than ever before. He’s all but scrapped his four-seamer, throwing it at just a three percent clip so far in 2022, while his sinker is being used at a career-high 51.3% clip. He’s also throwing his slider at a career-high 12% pace and his changeup at a career-high 15.9% rate — with that change in secondary offerings coming at the expense of his previous go-to curveball. Lopez is still tossing curve that 17.8% of the time, but that’s down significantly from 2018-21’s 27.8% usage rate. The velocity uptick is across the board — even Lopez’s changeup is average just under 91 mph — and it’s effectively rendered all four of his main offerings as above-average pitches. FanGraphs’ run values ​​peg each of Lopez’s sinker, curveball, changeup and slider as positive-value pitches this season.

If it seems like an out-of-the-blue breakout, that’s mostly true, although it’s possible that Lopez’s August/September performance in 2021 served both as a portent for this turnaround and as a means of saving his roster spot. Lopez lost his rotation spot after an Aug. 19 drubbing at the hands of the Rays (four runs in two innings). His next outing came out of the bullpen and featured a scoreless inning with a pair of strikeouts — and from that point forth, Lopez would pitch 8 1/3 innings of relief while allowing just two runs on six hits and two walks with 10 strikeouts.

That’s a tiny sample, of course, but the seeds of this breakout were quite likely planted at that point. From Opening Day 2021 through that final start on Aug. 19, Lopez threw his four-seam fastball at a 24.2% clip and his sinker at a 33.3% clip. The sinker was still favored, but his ineffective four-seam heater was a prominent part of his repertoire. Over his final eight relief appearances, Lopez shifted gear and turned to his sinker at a 48.4% rate while cutting back the use of his four-seamer to just 15.3%. The sinker, which had sat at 95 mph out of the rotation, jumped to 96.5 mph on average, and Lopez’s overall ground-ball rate soared from 49.4% to 66.7%.

Small-sample sources of intrigue like these don’t always pan out, but the O’s deserve credit for looking at Lopez’s strong bullpen showing down the stretch in 2021 and believing that he could build on that formula over a larger sample. The risk was minimal — $1.5MM and a 40-man roster spot all winter — but few would’ve batted an eye had the O’s non-tendered Lopez and looked to utilize that roster spot in a different manner.

Instead, the Orioles now have a pitcher who has genuinely been one of MLB’s best relievers in 2022. Lopez has a minuscule 0.73 ERA on the year, and he ranks in the 93rd percentile or better in each of the following (according to Statcast): expected ERA, average exit velocity, hard-hit rate, barrel rate, expected wOBA, expected batting average and expected slugging percentage. Lopez is one of just five relievers in MLB (min. 30 innings) with a strikeout rate greater than 25%, a walk rate under 10% and a ground-ball rate north of 50%. The others — Holmes, Taylor Rogers, Emmanuel Class and breakout rookie Jhoan Duran — are considered among baseball’s elite.

Of course, given the Orioles’ place in the standings and the protracted nature of their rebuild, trade speculation regarding Lopez is inevitable. General manager Mike Elias will absolutely be receiving calls and texts about Lopez’s availability — he sure already has — and Elias generally takes a “no one is off the table” approach regarding his veteran players. Lopez will surely be “available” to an an extent, but there might not be a trade candidate in baseball who has elevated his stock quite this extent in 2022.

Beyond Lopez’s pure dominance, he’d be a multi-year fix for any team willing to pony up with a hefty offer. The right-hander has two years of club control remaining beyond the current season, and given this year’s eminently affordable $1.5MM salary, his future raises will be starting from a relatively low baseline. In other words, he had to remain overwhelmingly affordable — especially relative to his newfound production — over the remainder of that club control.

The Orioles certainly don’t have to trade Lopez. By the time his club control is drawing to a close, in 2024, they may well finally be back to a state of competitiveness. At the same time, reliever performance is volatile on a year-to-year basis. Just as there’s risk in selling a high-end contributor like Lopez for unproven young talent, there’s risk that Lopez will sustain an injury or simply a downturn in performance — even if that appears unlikely based on his current skill set.

The O’s, for instance, had plenty of interest in lefty Paul Fry prior to last year’s deadline but held onto him (and his remaining three-plus years of club control). Fry melted down with 19 runs over seven post-deadline innings and wound up being designated for assignment earlier this year (at which point he was flipped to the D-backs for a 19-year-old in Rookie ball). Fry’s trade value wasn’t nearly as high as Lopez’s is now, nor was his future outlook quite so promising. That said, the manner in which his Baltimore tenure panned out is illustrative of the risk associated with rebuilding clubs holding onto bullpen arms in hopes of down-the-road contributions.

The nexus of Lopez’s dominance, his remaining club control and the Orioles’ timeline to compete will make him one of the most fascinating borderline cases to monitor as this year’s Aug. 2 trade deadline draws nearer. In the meantime, he’ll give O’s fans good reason to tune into the All-Star Game — well, if he’s still wearing an Orioles uniform by that point.